The northern Sumatran province of Aceh, Indonesia, hit global headlines in 2004 when it bore the brunt of the 2004 Asian tsunami. The disaster resulted in over 180,000 fatalities and IDR45 trillion (est USD32 billion) in damages as two-thirds of the province’s infrastructure was destroyed.

One of the worst affected coastal villages is Alue Naga in Banda Aceh, which lost 80% of its fisherfolk population and large tracts of land to the sea. Of the 6,331 villagers , only 1,270 survived, most still suffering the long term impact of the tsunami fourteen years on. Women villagers feel the impact disproportionately as the loss of mangrove forests along the estuary also wiped out their main source of income as oyster pickers.

As coastal communities face declining oyster populations and dwindling household incomes, Banda Aceh-based NGO Natural Aceh began experimenting with setting up artificial oyster farms which allow women to retrain as oyster farmers, building on their expertise as oyster pickers in mangrove forests. Rather than leaving women to rely on their traditional occupation of picking wild oysters, the artificial farms would enable the new farmers to harvest multiple times of their current crop at a fixed location near their village which has been approved for oyster farming by the local Department of Marine and Fisheries.

Creation of these farms will also reduce footfall at recovering mangrove areas, allowing the trees and roots to regrow and form a natural barrier against sea erosion.

Natural Aceh is a philanthropic organisation in Indonesia that was established in February 2003 to promote environmental conservation, reduce impact of natural disasters and provide socio-economic assistance to underprivileged communities. Through social enterprise initiatives such as artificial oyster farming, the organisation aims towards greater funding sustainability through successful community-led ventures. 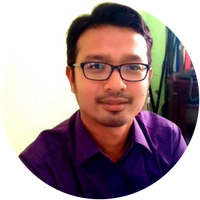 Zainal is passionate in researching, training, publishing and initiating various conservation and development projects focusing on the environment, disaster reduction, underprivileged communities, and other social issues. Zainal and his college friends also provide consultation and mentoring services in writing reports and scientific papers that are related to biology, and aim to make new discoveries as well as developing knowledge to improve quality of people’s lives.